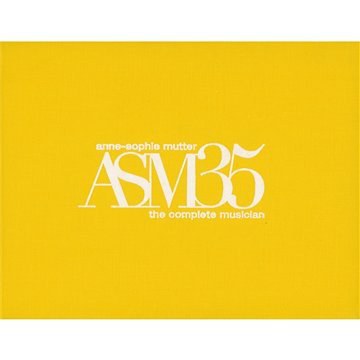 We're celebrating with a unique deluxe package that has everything. It's a box unlike anything you have seen before. A stunning, blow-you-away, multi-coloured object made of high-quality, transparent, frosted injection-moulded acrylic.
"The complete musician" Box comprises three separate elements: * A solid, heavyweight base in translucent red, including a white CD "bin" to hold the 40 albums * A detachable green "book-shelf" that holds the BOOK (see info below) -- with an embossed metal DG cartouche on its side * Bright yellow cover that envelops the whole package, with etched ASM35 logo * In addition, a wrap-around info-sheet will be set under the shrink-wrap on the side of the box -- it will fall away when the shrink-wrap is opened. It will thoroughly describe -- both in bullet-points and with a "still-life" photograph -- the box's design and its contents; plus feature the Deutsche Grammophon and the ASM35 logos. This is the LIMITED EDITION to end all Limited Editions. Each set is NUMBERED individually. Anne-Sophie Mutter will personally autograph the first 400 copies (which will be distributed randomly). WHAT'S IN THE BOX? * Anne-Sophie Mutter's complete Deutsche Grammophon discography (plus two bonus discs of previously unreleased recordings) collected into one gorgeous package * It's a 40-CD set -- all of her Deutsche Grammophon recordings from her début Mozart Concertos (1978) to her Brahms Sonatas (2010) -- all with original cover-art (the mini-sleeves have actual spines -- and include inner sleeves) * So you get: All of her Karajan recordings (1978-1988); her best-selling Carmen Fantasy CD; her Grammy®-award winning Beethoven Violin Sonatas; the magisterial survey of Mozart's Concertos, Sonatas and Piano Trios from 2006; contemporary compositions dedicated to her by Henri Dutilleux, Sofia Gubaidulina, Witold Lutosławski, Norbert Moret, Krzysztof Penderecki, André Previn, and Wolfgang Rihm * PLUS TWO BONUS CDs of rare and previously unreleased recordings: the Lutosławski Memorial Concert in Warsaw (1994); a chamber recital with Lambert Orkis (1990); and the 11-year-old Anne-Sophie playing solo Prokofiev (1974)
THE BOOK: is hardcover, full-colour, 300 pages -- including: * A new exclusive extended interview with Anne-Sophie Mutter * A charming appreciation by André Previn (which can also function as a great press text, by the way) * An essay on recording with Anne-Sophie by her regular accompanist Lambert Orkis * Warm recollections of the young Anne-Sophie by Aida Stucki (her teacher); Herbert von Karajan, her mentor; and Sir Yehudi Menuhin, the first violinist who inspired her * Her complete illustrated Deutsche Grammophon discography and track-list * More than 150 photographs -- from childhood to the present day, many published for the first time -- a wonderful record of her life in pictures.