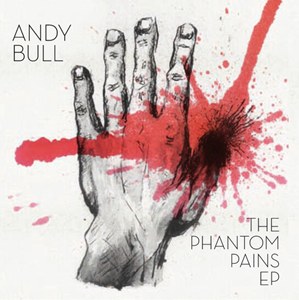 In 2009, Sydney singer-songwriter Andy Bull released his impressive debut album We're Too Young; a sprawling, imaginative collection of songs that earned him critical acclaim and the reputation amongst his contemporaries as Australia's "songwriter's songwriter". Less than a year after releasing his debut, Andy has returned with the Phantom Pains EP a 6-track EP that casually defies the conventions he established for himself on his first release. Recording the EP in a single room with no separation between instruments, Andy and his long time producer Tony Buchen have discarded many of the formalities of the studio in favour of a raw sound that speaks to the vulnerability implicit in Andy's lyrics. Phantom Pains may prove to be Bull's musical coming-of-age. "A lot of the things I used to be very concerned with, musically and personally, started to fall away, and continue to fall away, like a period of correction. I guess I like this idea of a necessary correction" says Bull, who's elegant lyrics reveal a surprising melancholia, as on the title track, a story about a man who cuts off his own hands to atone for a shameful past, or 'Dog', a song about killing a menacing dog who silently stalks him, (a song which also happens to feature the haunting vocal flourishes of his old touring buddy Lisa Mitchell). The Phantom Pains EP is Andy's most personal and exciting work thus far, and his musical contemporaries seem to agree, judging by the impressive list of friends who stopped by his house while he was recording it just to 'do their bit' and be a part of it all - a list that includes luminaries Lisa Mitchell, Little Red, Adrian Deutsch, Hungry Kids of Hungary and Deep Sea Arcade (whose bassist Nick Weaver and drummer Carlos Adura have become Bull's rhythm section). "I can't believe my luck; it all just sort of happened." says Bull.