So Runs the World Away 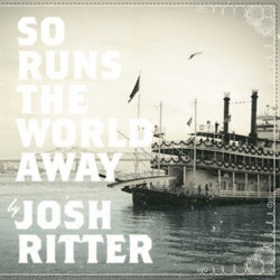 A note from Josh Ritter on So Runs the World Away...
"So Runs the World Away was almost two years in the making, and the most difficult album I’ve made so far.
After my last record, Historical Conquests, a feeling came stealing over me that I had a reckoning in store. It was a new feeling, sinister in its emptiness, and it fell across me like a cold shadow. After almost a decade on the road, my life seemed as if it had become the one I always dreamed of; I was playing shows, living the charmed existence of a writer who has worked very hard and been very lucky. Still, the shadow was there, and I knew it had found me for a reason. I knew that I would have to wrestle it eventually. In the meantime though, in the words of Muriel Spark, I went on my way rejoicing. Then one day the shadow fell across me and stayed there. You know what that’s like. Anyone who loves to do something and then, one day, finds no joy in it, knows what that’s like. I suppose I could say I was burned out, but it wasn’t that; I wanted to write and I wanted to play, but nothing, nothing felt right to me anymore. Even more than that, nothing felt original. Suddenly, after all my effort, I had lost my confidence in the force and originality of my own work. I wrote and wrote. Nothing came and if it did, it was the same old stuff as before. My old songs came ringing back, silly, bereft to my ears of their original love or intent. I felt at times as if I was hovering just above myself, watching the mediocrity of my afternoon threatening to spread across months and years into a lost decade. And with nothing to show for myself would anyone ever believe how hard I had worked? The shadow hung and I held on, hoping for a single verse of something, anything at all that I could love.
Then one night, lying awake and looking at the ceiling, with the sound of taxis and garbage trucks trolling the streets outside our window, a story came. It wasn’t just a verse, it was a story, whole, ripe for the writing as if dropped from some apple tree down on my sleepless head. It was, strangely enough, about a mummy and his malign love affair with an archaeologist. I got up and wrote it in the bathroom, sitting on the edge of the bathtub. I thought the story was fiendish and tense and sad and funny. I was proud of it. The pride I had in it propelled me forward in a rush. I couldn’t stop writing after that. I wrote everyday, and as I reached the limits of what I could accomplish with a narrative in a single song I also began to write a novel, tentatively titled Bright’s Passage, finishing both at roughly the same time.
With each record I make there is always a song that forms the pallet by which the other songs can be painted. For So Runs the World Away, “The Curse,” my mummy song, was that song. I liked the idea of a Victorian archaeologist, and began looking at all kinds of late 19th and early 20th century science books. These led me, as most science histories lead, back farther, to Newton and his gravity, his wonder, his restless curiosity, and his bewildered religious questing.
I found myself reading about orbital decay, the Martian canals of Percival Lowell, the apocryphal hibernation of birds, polar exploration, the golden ratio. At the time I saw no threads running through my library wandering, but looking back now, I can see a common preoccupation with exploration, regardless of the journeys’ outcome. The song “Another New World” tells of a troubled voyage to nowhere, and the narrator of “Southern Pacific” reminisces while on a train into the unknown wilderness. “Lantern” and “Long Shadows” are about getting lost in the lonesome valleys we all have to walk at times, while “Lark” finds visions of the universe available through telescopes on the same mountains where ecstatic visions have always taken place. Looking out across the drifts of nothing, I discovered these songs buried deeply.
The band and I recorded whenever we could, mostly in Maine at Sam Kassirer’s Great North Sound Society and also a bit at Dawn Landes’ Saltlands Studio in Brooklyn. Over the course of a year “Change of Time” and “Rattling Locks” grew to their present mammoth size and “Orbital,” a song about nature’s manifold encirclings, found its way through three different versions. Several songs went through numerous incarnations before being cut all together. “Folk Bloodbath,” a song I’ve been trying to get right for a long time, finally snapped into focus under Sam’s watchful eye. Zack played instruments I’ve never even heard of, Austin went places on the guitar and banjo that I’d never conceived of, and Liam, as usual, was a tectonic bedrock of, well, rock. We’re a good team, my band and I, and much of what we learned making Conquests we were able to expand on So Runs the World Away. On the whole, the songs are larger and more detailed and feel to me as if they were painted in oil on large canvasses.
So Runs the World Away marks the beginning of a new period in my life. I’m not a kid anymore —the hand to mouth days are gone, hopefully for awhile—I have a career I love and that I’ve fought for, and I have an astounding cast of friends and family and listeners who continue to help me to fulfill my love. My deepest thanks to all of them for hanging in with me longer than the shadows."

So Runs the World Away的曲目列表

So Runs the World Away的短评(27)