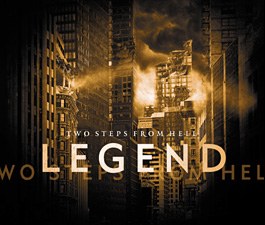 Two Steps From Hell music has recently found its way into the ad campaigns of many of the top films coming out of Hollywood. Films like Indiana Jones, Mummy 3, No Country For Old Men, WALL-E, Horton Hears A Who, Chronicles of Narnia 2, The Happening, Hellboy 2, The Hulk, Speed Racer, Jumper, and Valkyrie. Now, Two Steps From Hell proudly introduces "LEGEND". LEGEND is an epic drama cd, and is quintessential trailer music, but manages to bring magic and artistry to the genre. LEGEND is a state of the art production mixed at Two Steps newly built mastering studio. It has highly memorable and powerful themes recorded live at Capitol Studios with some of LA's finest musicians. Tracks were also recorded in Prague with the Capellen Orchestra. The music on "LEGEND" is perfect for productions that need music that grows gradually in intensity, and is particularly well-suited for visuals of a progressive character. If you need memorable music that totally immerses and captivates the audience, look no further than LEGEND! All music written by Thomas Bergersen & Nick Phoenix, with additional tracks by Troels Folmann.