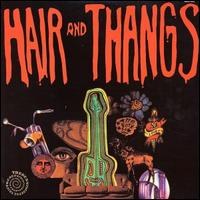 Dennis Coffey's solo debut offers a primer in psychedelic funk, marshaling fuzz-laden guitar wizardry, deeply soulful organ fills, and rubber-band rhythms to forge one of the most sample-ready records of the late '60s. As its title suggests, Hair & Thangs draws much of its inspiration from the flower-power musical Hair, covering the soundtrack's "Let the Sunshine In," "Aquarius," and "Sodomy." Coffey's trademark guitar distortion suffuses the songs with a grit and edge that effectively undercuts the saccharine flavor of the originals, but also he retains the instincts and humility of a sideman, avoiding pyrotechnics to allow organist Lyman Woodard and drummer Andrew Davis to shine on each cut. The disc's flip side is even more effective, with ingeniously funky readings of the Isley Brothers' "It's Your Thing," Charles Wright's "Do Your Thang," and the Beatles' "Hey Jude." DJs and beat-freaks will find much to sample and savor here.