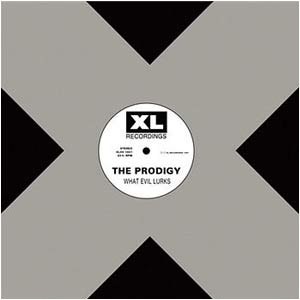 Reissue of Prodigy's first demo.
The first demo Liam produced was an EP called What Evil Lurks in 1990. The first release by The Prodigy consists of 4 tracks from the 10 track demo he gave to XL. This included an early version of Everybody in The Place. After this came Charly and everyone knows the rest.
Using a single Roland W-30 Liam created most of the EP by simply assigning the various samples and drum loops to each of the W-30's channels, and mixed down to tape. The title sample "What Evil Lurks in the hearts of men" is taken from the 40s radio series "The Shadow" and you can thrill to your very own "Come on y'all"
'What Evil Lurks' EP was evetually re-released in 2005. Only difference is the catalogue number XLXV1501 (on the original release XLT-17). Tracklisting is the same. The sleeve itself is slightly different (15th anniversary sleeves). Some vinyls came with a black sticker on the front.