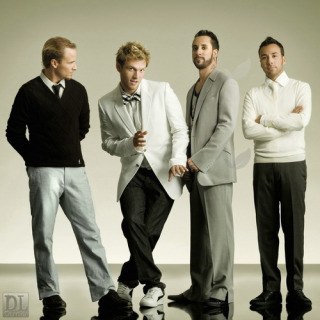 The group has been working on a new album due for release in 2009 and are confirmed to be working with Max Martin[29], OneRepublic singer Ryan Tedder, RedOne, Ne-Yo, Brian Kennedy, Jazze Pha, Pitbull, Claude Kelly, Akon, Jim Jonsin, Eddie Galan, T-Pain, Rami Yacoub, Kristian Lundin, and many others have confirmed collaborations on the new album[30].
According To KBS Radio The Backstreet Boys have recorded 18 songs for their new album. On May 1, 2009, the Backstreet Boys management team expressed discontent at fans posting leaked songs. Although it is still unclear as to how the songs were leaked, it has been confirmed by management that the leaks were unintentional. The album musical direction appears to be following a more Pop/R&B Urban sound. Tracks leaked include: "Bigger", produced by Max Martin, "Masquerade", produced by Brian Kennedy, and "Helpless" produced by Jim Jonsin.
In an interview with Extra TV the Backstreet Boys confirmed the title of their seventh album to be "This Is Us".[31].
The Backstreet Boys formally announced the dates for the European leg of the new tour for their newest album, "This is Us". The tour will start on October 30th.
Brian announced at his twitter page [32] that the new single is called Soldier Down, produced by RedOne and will be released at the end of July. He also announced on his twitter page that the new album will be released on October 6th, 2009.