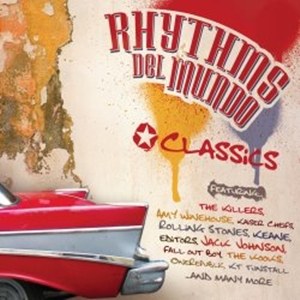 The biggest stars in the music industry have joined forces to raise their voices to the latest Rhythms del Mundo album, ‘Rhythms del Mundo Classics’ produced to raise awareness and funds for climate crisis projects and natural disaster relief.
The album is released on Universal Music on July 13, 2009. The sublime talent of Cuba’s finest musicians with the unmistakable vocals of artists including The Killers, Amy Winehouse, Jack Johnson, The Rolling Stones, Kaiser Chiefs, Fall Out Boy, among other great artists. The result is a unique formula merging Afro-Cubano rhythms with some of the most memorable songs of the last 40 years. With brand new recordings from the likes of The Killers, Editors, KT Tunstall, The Zutons and OneRepublic, through to special recordings from contributing artists such as Amy Winehouse, this long player is set to be the soundtrack to the summer.
This album is the latest project from Artists Project Earth (APE) and follows in the footsteps of the first release Rhythms Del Mundo-Cuba! (ft. Coldplay, U2, Radiohead, Arctic Monkeys and others) which went platinum and gold in many countries across the globe.
As a result, over 170 Climate Change Projects have already been supported through APE and the Rhythms del Mundo projects. Kenny Young, RDM’s producer and founder of APE says: ‘These great artists have given up their time to be part of an album that will raise awareness for the most crucial crisis facing us today, Climate change is our greatest global challenge and unless we act now, future generations will suffer for our greed and ignorance and they certainly won’t ever forgive us’.