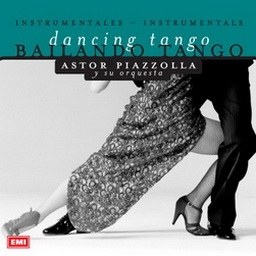 This is Astor Piazzolla's tango album,released in 2002.Piazzolla's nuevo tango was distinct from the traditional tango in its incorporation of elements of jazz, its use of extended harmonies and dissonance, its use of counterpoint, and its ventures into extended compositional forms. Piazzolla also introduced new instruments that were not used in the traditional tango, including the flute, saxophone, electric guitar, electronic instruments, and a full jazz or rock drum kit. Piazzolla played with numerous ensembles beginning with the 1946 Orchestra, the 1955 "Octeto Buenos Aires", the 1960 "First Quintet", the 1971 "Noneto", the 1978 "Second Quintet" and the 1989 "Sextet". As well as providing original compositions and arrangements, he was the director and Bandoneon player in all of them. His numerous compositions include orchestral work such as the "Concierto para Bandoneón, Orquesta, Cuerdas y Percusión", "Doble Concierto para Bandoneón y Guitarra", "Tres Tangos Sinfónicos" and "Concierto de Nácar para 9 Tanguistas y Orquesta", as well as song form compositions that still today are well known by the general public in his country, like "Balada para un loco" (ballad for a madman). Biographers estimate that Piazzolla wrote around 3,000 pieces and recorded around 500.