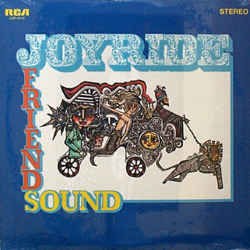 Upon leaving Paul Revere & The Raiders, Drake Levin, Phil Volk & Michael Smith formed Brotherhood who released two albums for RCA. In between those two releases, the trio teamed up with a few session musicians as Friend Sound, releasing "Joyride"
A wild batch of instrumental psychedelia -- with plenty of avant garde touches thrown in! This is the sort of record that always restores our faith in major labels -- and it makes us realize that no matter how many Elvis Presley albums RCA was selling in the 60s, there was also room to put out odd little record like this one. The enigmatic Joyride are kind of a loose collective of hippie jazz musicians -- playing flute, organ, guitars, percussion, piano, recorder, shovel (shovel?), finger cymbals, and just about anything else that seemed to be handy -- and they had a style that was kind of like free-jamming jam band stuff, but with out the skill of most jam bands. Ok, it sounds like we're talking ourselves into a corner -- but the record's pretty darn compelling. It's kind of like the band and the engineers took a bucketful of drugs -- so many that they got really mellow and dark -- then went into the studio to cut a tripped-out album of instrumentals. The whole thing comes across with the same "anything goes" spirit of the NY 60s underground film scene -- but with none of the silliness of bands like The Fugs -- and it's that kind of energy that makes us love this one, and be proud that we're just giving it a space to exist. Titles include "Childhood's End", "Lost Angel Proper St", and "The Empire Of Light".