Blame It on Society 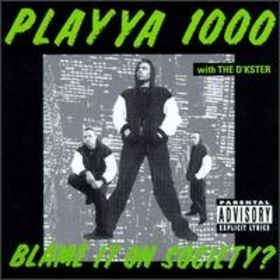 Playya 1000 With The D’kster is a hip-hop/rap duo from Tulsa, Oklahoma, and members of the local rap group DC Boys.
Blame It Society? is their second album, released for the independent label Small Town Recordings and produced by the duo themselves. The album sold roughly 20,000 copies and was featured in The Source Magazine.

Blame It on Society