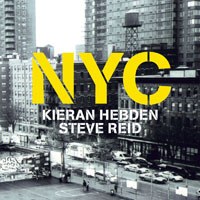 ‘NYC‘ is Kieran Hebden’s (aka Four Tet) fourth collaboration with veteran jazz drummer Steve Reid and while I won’t pretend that I have heard the other three, the word in the blogosphere is that this is the most equal of their partnerships, with Hebden given much more license to stamp his mark on the record. Certainly fans of Fridge and Four Tet would be foolish to overlook this, a beautiful and intensely atmospheric mini-album. Although I don’t have the cover artwork to hand it is impossible to listen to ‘NYC’ and not picture a seething, rain-lashed megatropolis. It’s a murky, cavernous record easily redolent of old Scorcese films: steam rising from man hole covers, pimps lurking in shadows, dealers dealin’ (to borrow from Bobby Gillespie). The percussive energy and gently building tensions and atmospherics make it less wilfully difficult than such jazz-electronica collaborations might lead you to expect.
It is interesting to note that while Four Tet’s most recent EP ‘Ringer’ sidestepped into more synthetic soundscapes, NYC is very much in line with the textures that made Hebden’s name: scuffed, jazzy rhythms; heavily-reverbed splices of acoustic guitar and piano; and a mulchy organic quality that once inspired the horror pigeonhole ‘folktronica’. But folk this isn’t, this is tranced-out bebop - rollicking, sweaty jazz augmented with synths and echo effects. It’s the kind of fuggy cinematic brew that should entice fans of David Holmes circa Let’s Get Killed, early DJ Shadow and DJ Krush (minus the hip hop esoterica), Amon Tobin, and Four Tet disciples from Pedro to Nostalgia 77.
The murky opener ‘Lyman Place’ is a bit of a red herring, as it’s probably the most abrasive track on the album - a pressure cooker of grinding bass loops and rusted-metal percussion. It’s a mood revisited on the dank, clunking ‘25th Street’, which sounds like a network of subterranean pipes rattling and hissing into life, building into a lolloping groove. ‘1st & 1st’ sounds like a gritty 70s cop show theme tune pulled apart and doodled over with freestyle drumming and lots of electronic, dubby ephemera. ‘Arrival’, the album centrepiece, is a meditative, awakening but still somehow urban piece, augmented by shimmering synths, vibrating drones and Reid’s scattershot percussive improvisations. This stunning high is sustained into the bustling ‘Between B & C’ in which Hebden showers sparkling, sped-up synth fragments over a gorgeous piano groove. ‘Departure’ is Four Tet all over: loops of chime-like textures which simmer and subside while Reid grooves sporadically over the top, and occasional beams of pure Bladerunner synth shoot out from the speakers. It’s wonderful, heady, spectral stuff that gets better and better, both throughout its recording time and with each listen - an unexpected delight.