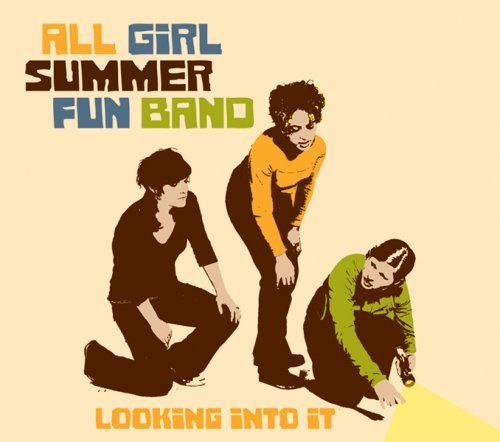 For ten years, the All Girl Summer Fun Band has blasted gritty, sunny pop gems out of rainy Portland with a fervor, enthusiasm, and stamina that is quintessentially Pacific Northwestern. Their newest LP, Looking Into It, follows 2003's 2 (K Records) and is distilled, concentrated AGSFB. Jen Sbragia (The Softies), Kim Baxter (Cherry Ice Cream Smile), and Kathy Foster (The Thermals, Hutch & Kathy) don't hold back the jams.

Looking Into It is not only a stunning pop album filled with the band's signature crunch-fuzz guitars and dead-on melodic sense, but lyrically, AGSFB bravely confronts issues such as greed, death, getting fired, relationship dynamics, and new love. This is AGSFB at their rawest, brightest, and best--and they know it. The band worked on several of these songs for years, meticulously writing and rewriting until they knew they had accomplished what they set out to do. Recording the album entirely in Baxter's basement studio gave the band the ability to do without constrictive studio schedules and the monetary demands that come with studio recording, and allowed the band members to push themselves musically, especially in terms of handling songwriting with a new emphasis on total collaboration. The album's conception, execution, capture, and release embody what is incredible and vital about DIY creation--AGSFB has made a stunning record exactly the way they wanted. Enjoy.

Not the One for Me