The Pains of Being Pure at Heart EP 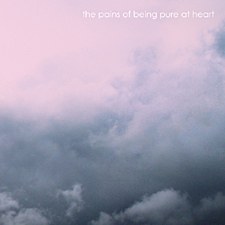 Like The Radio Dept. and Jesus & Mary Chain collaborating in a mystical universe where members of both bands could be hip teenagers in '86 -'92 era NYC and London simultaneously. Imagine if The Ramones traded in their leather jackets for anoraks, or Stephen Pastel actually threw Aggi off the bridge and married Black Tambourine's Pam Berry and had three babies that formed a pop band in 2007. Meet The Pains of Being Pure at Heart, a New York three-piece who plays dreamy, noisy POP with boy/girl vocals, blissful melodies and blistering mechanical drums. Their debut, a self-titled five song EP, opens with "This Love is Fucking Right!," a nod to the Field Mice's classic, "This Love is Not Wrong." With an instantly recognizable beat and euphoric jangle-pop hook, the track is overflowing with the kind of summery, unabashed loveliness that would make Robert Smith smile (or sue). "Orchard of My Eye" is even more propulsive and full of shimmering guitars, but with call and response boy/girl vocals that teases out the subtle sexual dramatics of the lyrics. "Doing All the Things That Wouldn't Make Your Parents Proud," "Hey Paul" and "The Pains of Being Pure at Heart" bury the poppy jangle of the first two tracks with layers of fuzz, feedback and white noise. But no matter how much hiss, squeal and flat-out disregard for "proper" levels are displayed on the EP's final three tracks, the pop still manages to survive unscathed. This all might bring to mind early Jesus And Mary Chain minus the dark brooding (especially on the eponymous, anthemic closer), but "Paint a Rainbow"-era My Bloody Valentine, Teenage Fanclub or even the fuzzy, literate powerpop of Stars are equally valid points of comparison. After their first show in March of 2007, a former A&R man for a major label approached the band and asked if they wanted to be famous. When Kip replied, "among 10-15 people, yeah," the A&R man looked rather relieved and said, "That's very likely. Have fun." Here are some bands The Pains of Being Pure at Heart really like (but maybe don't sound quite like): The Pastels, The Exploding Hearts, Black Tambourine, The Ramones, My Bloody Valentine, Nirvana, Rocketship

The Pains of Being Pure at Heart EP的曲目列表

This Love is Fucking Right!
Orchard of My Eye
Doing All the Things That Wouldn’t Make Your Parents Proud
Hey Paul
The Pains of Being Pure at Heart
展开

The Pains of Being Pure at Heart EP的短评(12)