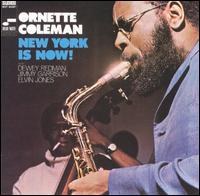 Recorded during the same session that resulted in the Love Call album (in late April and early May of 1968), New York Is Now is one of the true curiosity pieces in Ornette's catalog. With a rhythm section comprised of ex-Coltrane sidemen Jimmy Garrison and Elvin Jones as well as tenorist Dewey Redman, Ornette is, in some sense, at odds with himself here. This particular rhythm section is a lot more modally than harmonically propelled -- especially Jones, who sounds here like he doesn't know what to do with himself in the restrictive tempos -- and creates a complex set of issues for Coleman and Redman to contend with. That said, on "The Garden of Souls," which opens the album, Coleman makes the most of this sprightly, energetic rhythm team and moves through quotations of "Moon River," "Danny Boy," and even Paul Muriat's "Love Is Blue" during his solo, before shifting the harmonics around and anchoring them somewhere between E flat 7 and E major. On "Broadway Blues," Coleman uses Monk liberally in his melodic conception, and he and Redman have a go at turning a seven-note vamp into all sorts of knotty material for soloing -- and you can almost feel Jones smile as the tempo reaches triple time as the saxophonists race each other through it. And while this date is of only marginal interest on some level (for true hardcore Ornette-ophiles), it is pleasant and amusing if not amazing -- with the exception of "For a Commercial," which features Ornette's "fine" violin playing above the rest of the band in the mix (what a downer). ~ Thom Jurek, All Music Guide