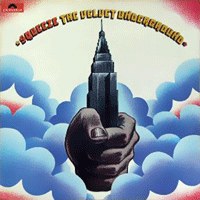 The Velvet Underground — which at that time consisted of Doug Yule (vocals/guitar), Willie Alexander (keyboards/vocals), Walter Powers (bass guitar) and Maureen Tucker (drums) — had toured the United Kingdom and The Netherlands in October and November of 1971 to support its latest album, Loaded, which had seen a European release in March of that year. The plan was to record a second and final album for their record company, Atlantic Records, afterwards, [1] but Atlantic had lost faith and decided to issue an archive recording from 1970 featuring Lou Reed, Live at Max's Kansas City, instead. [2]
After the tour, band manager Steve Sesnick managed to get a recording deal with Polydor UK to record a final Velvet Underground album. Alexander, Powers and Tucker were sent back to the United States by Sesnick, however, presumably to retain maximum control over the finished product. [3] Thus, Yule was the only Velvet to actually perform on the album. Although Squeeze was released nominally as a Velvet Underground album, it could justifiably be regarded as a Doug Yule solo album in all but name.
The eleven songs that make up Squeeze were written by Yule and recorded with the help of Deep Purple drummer Ian Paice, with additional occasional saxophone and backing singer assistance. They range from Beatles-like whimsy ("Crash") via pop to typical 70s rock ("Mean Old Man").
Squeeze was recorded in the autumn of 1972 and released in the United Kingdom, France, Germany (all 1973) and Spain (1974)[4]. No singles were taken off it and the album did not chart. Yule assembled a backing band consisting of Rob Norris (guitar), George Kay (bass guitar) and Mark Nauseef (drums) to tour the United Kingdom in November and December 1972 to promote the upcoming album; a live recording from this tour is included on the 2001 live box set Final V.U. 1971-1973. After the tour, during which they were deserted by Sesnick, Yule also called it quits, bringing the Velvet Underground to an end[5].
Squeeze saw a number of re-issues in France during the 1970s and early 1980s. It has been out of print since, and has not been issued on compact disc. The status of Squeeze in the Velvet Underground's canon is generally regarded as dubious; the 1995 Velvets boxed set Peel Slowly and See includes the four studio albums from the Lou Reed era of the band, but excludes Squeeze. In the Peel Slowly and See liner notes, David Fricke dismisses Squeeze as "an embarrassment to the Velvets' discography."
这张地下丝绒的专辑其实已经不算是真正的VU专辑了，最多也就是挂着丝绒名的Doug Yule 的个人专辑,历来评价不高,不过VU的铁粉还是可以听听试试
下面提供试听地址(注:可能要注册帐户)
http://www.feelfm.com/r/34/r_66453.htm