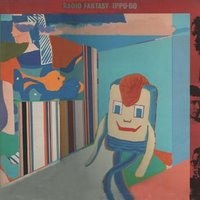 A Japanese techno-pop trio of the early '80s led by singer/songwriter Masami Tsuchiya, Ippu-Do was the missing link between Japan's Yellow Magic Orchestra and England's Japan -- neither as purely electronic as the former nor as prettily atmospheric as the latter. (YMO's Ryuichi Sakamoto collaborated with Tsuchiya on his 1982 solo album Rice Music, and Tsuchiya played guitar with Japan on the Asian tour documented on the live album Oil on Canvas.)
Ippu-Do debuted in 1980 with the new wave-influenced Normal, on which the trio (Tsuchiya on vocals and guitar, Akira Mitake on keyboards, and Shoji Fujii on drums) sound a little like a Nipponese version of New Musik or Split Enz. The trio quickly followed this with Real, which was more of the same, but 1981's Radio Fantasy (the trio's first release outside of Japan) was almost completely electronic. The group went on hiatus after that release, with Tsuchiya beginning his solo career and his temporary membership in Japan. A best-of disc, Lunatic Menu, was released in 1982 in Japan and the U.K.
When Ippu-Do reappeared in late 1983, they were reduced to a duo of Tsuchiya and Mitake. Supported by drummer Steve Jansen and keyboardist Richard Barbieri of Japan and American bassist Percy Jones, the duo recorded the danceable Night Mirage, a supple blend of Japan's crystalline sound with some surprising R&B and funk rhythms. A two-disc live set with this lineup, Live and Zen, came out in 1984, but Tuschiya returned to his solo career at that point, bidding farewell to Ippu-Do with a well-chosen compilation in 1985. An expanded compilation, The Very Best of Ippu-Do, came out in 1998.