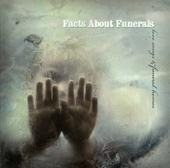 With a haunting, skewed pop sound that mixes Nick Drake with the likes of the Pernice Brothers and Sparklehorse, Seattle, WA's Facts About Funerals grew out of an earlier band, New West Motels, which featured the singing and songwriting skills of Rob Sharp and guitarist Max Keene. Following a series of family tragedies, Sharp needed a break from the band and took an extended breather, but soon discovered that writing songs was the best therapy, and emerged with a host of new material and newfound energy.
The band reunited in Seattle with Sharp and Keene remaining from the original New West Motels lineup, and the pair were joined by Doran Bastin (bass), Mat Mathews (drums), Pete Colclasure (piano), and Jay Kardong (pedal steel and slide guitars). This new version of New West Motels flew to England and recorded the Love Songs & Funeral Homes album in Little Neston at APE Studios. The new album, which featured a more skewed and deliberately murky pop sound than the earlier New West Motels material, made Sharp and company realize that they were in many ways a completely new band, and the group decided to change its name to Facts About Funerals. The debut album under the new name was released in 2008 on San Francisco-based Evangeline Records.