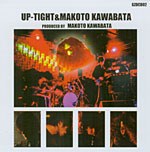 Flattening new CD from one of the greatest live psych groups in the world. Anyone who witnessed their monolithically powerful set at Instal 2005 needs this incredible disc, one of the most epic and dynamically damaged post-Velvets acid rock re-thinks in recent memory. The addition of Acid Mothers Temple guitarist Makoto Kawabata brings an even darker/more elegantly fucked sensibility, with the result that every track feels like it could explode into narcotic chaos at any moment. Aoki’s vocals strike the perfect post-Reed/Verlaine/Hell level of decadent damage and the songs are just beautifully rendered, with the group stretching mantric rock forms into whole new zones of affirmative electric beauty. Fuck. Highest recommendation. Comes with great Velvet Underground rip-off sleeve, too.