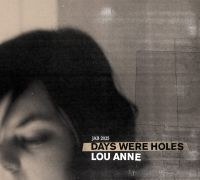 Lou Anne's awaited first record will be out on Monday 19th January. "Days were holes" conveys perfectly the band's identity in an intense collection of songs with beauty and sensibility, a brilliant first offering. Their forte is music with guitars, with a penchant for the most classic textures of pop and rock, complete with organ washes to provide with the appropriate mood. All this is topped by gorgeous vocals and a solid rhythm that beautifully cements the songs.
A long awaited record indeed, as this foursome from Murcia, Spain (Pilar, keyboards and vocals, Nacho, guitar and vocals, Jaime, bass and Ismael, drums) have been really busy since they won the Demo 2003 competition (organized by the Benicàssim Festival organizers), relentlessly playing live with, among others, The Postal Service, and taking part in different summer festivals. Eventually, they found some time to gather together in the studio and make a record which has made everyone really happy.
It features 11 songs, eight of which are new ("Suddenly", "Semitone", "New in dee", "Where to go", "Roomlandhome", "The american dream" and "Softly gone") but which they had already been playing live, and four already featured in their demos ("Breething here to stay", "You came in", "Stereo" and "Weep my eyes"). The result are 45 impressive minutes of intense, moving music, rich with subtleties, and flavours ranging from the classic (The Byrds, Flying Burrito Brothers, The Beach Boys or Belle & Sebastian) to the stormy verve of species in the danger of extinction (My Bloody Valentine, Stereolab, Yo La Tengo or Sonic Youth). These double-sided influences make Lou Anne a really exciting band that pictures perfectly our hearts' changing moods, all driven by a positive, energetic strength. This particular personality of the band is present from the first chord of the moody "Suddenly", to the last Country sigh of "Softly gone". A varied, coherent repertoire rooted in the best of pop and rock, seen through their particular ocher-stained glass. The result is not old-fashioned, but music with roots but with a spirit of renewal. And, of course, a collection of great songs that puts Lou Anne in the first positions of the most promising new Spanish bands of the last years.