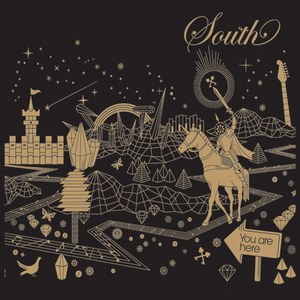 South’s roots can be traced back to a time, not so far in the past, when it was considered utterly uncool to carry, much less play, guitar: when three young boys Joel Cadbury (lead vocals, bass and guitar), Jamie McDonald (lead guitar, vocals and drums) and Brett Shaw (drums and guitars) began to play music together (mostly electronica) at the ripe age of fifteen. Just a short year later, the newly formed South started self recording on a 4-track. Through those first years, the band found a mentor in ex-Stone Roses frontman Ian Brown and later found a fan and guru in UNKLE's James Lavelle, who signed the band to his personal record label Mo-Wax in the UK.
Known for their goal of never making the same record twice, it’s no surprise that You Are Here is an obvious departure from the more electronica oriented Adventures in the Underground Journey to the Stars (2006), lending itself instead to more carefully orchestrated ballads. The album, most of which was self produced, opens with “Wasted,” a track that boasts an airy vocal melody reminiscent of Sergeant Pepper’s era Beatles anchored by a bass-heavy piano line. “Better Things,” lifts the mood of the album with more breezy vocal melodies and beautiful yet uncomplicated guitars. South haven’t entirely disowned disco, as “She’s Half Crazy” demonstrates with its subdued dance feel. The album closes on a perfect note with the mesmerizing harmonies of “Zither Song (Sometimes).”
http://www.myspace.com/southofficial