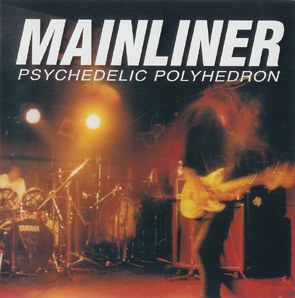 Aquarius Record website - List n°203, 17 December 2004 (USA)
The new cd from Japanese psychedelic power trio MAINLINER is actually a reissue of their previously vinyl-only Psychedelic Polyhedron LP from back in '97, which was MAINLINER's second album, though a lot of folks never saw it. At last it's now on cd for all you MAINLINER fans who missed out on that long-gone import vinyl. Huh? No, I'm not shouting at you. It's just that putting MAINLINER in all-caps seems like a fitting way to indicate how loud and distorted and blown-out and in-the-red these guys are. But you know that already. Alongside bassist Asahito Nanjo's other band High Rise these guys are the kings of Japanese garage acid fuzz speedfreak heavy psych, pretty much. Though, actually, on this record, the original two side-long cuts, "Show The Cloven Hoof" and "Cardinal Virtues", were slightly less bludgeoning than usual Mainliner fare, being dark, meandering improvs closer to another of Nanjo's projects, Ohkami No Jikan, than to the pedal-to-the-metal rock insanity of, say, Mainliner's perversely titled debut Mellow Out. But compared to almost anything else they're certainly over-the-top. And this compact disc reish includes a bonus third track also from '97, a riffier ten-minute rocker called "Solid Static" if somehow you need an adrenaline kick after those first two 20 minute tracks. In case you're curious, the line-up for this particular Mainliner album is the same as yet another of Nanjo's bands, Musica Transonic, the trio consisting of Nanjo with guitarist Makoto Kawabata (Acid Mothers Temple) and drummer Tatsuya Yoshida (Ruins)!