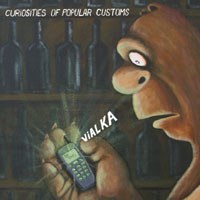 All songs composed by Vialka; except for Kang Ding Town, which is a traditional Chinese folk song, and the texts in Die Lorelei by Heinrich Heine, and Shitty Monkeys by Haruki Murakami. All sounds extracted and sculpted by Bob Drake at Studio Midi-Pyrénées, between concerts in Minsk and Porto in late-November/early-December 2004. Vialka is Eric Boros (baritone guitar and voice) and Marylise Frecheville (drums and voice). "Potap & Mobil" and "Computer" paintings by Nikolai Kopeikin, photo by Isabelle Bassot, and layout by Anne Gally.