Live at the Old Waldorf 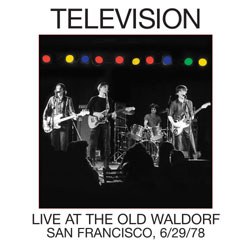 Television were generally regarded as the precise and arty guys of the original New York punk scene -- enough so that some have (rather pointlessly) questioned just what they had to do with the punk rock aesthetic -- but while the clean lines and gleaming surfaces of Marquee Moon and Adventure might have inspired such thought, the band's live show told a different story. While they lacked the bash-it-out ferocity of the Ramones or the Dead Boys, on-stage Television played a lot harder and looser than they did in the studio; the guitar interplay between Tom Verlaine and Richard Lloyd gained much grit and muscle (and Lloyd was given significantly more space to show what he could do), and drummer Billy Ficca and Fred Smith weren't afraid to turn up the heat and add greater color and body to the songs. While the splendid "authorized bootleg" The Blow-Up is likely to remain the definitive document of Television's awe-inspiring live prowess, Live at the Old Waldorf -- a professional recording of a 1978 San Francisco date on the band's last tour before their 1992 reunion -- runs a very close second, and the superior sound quality allows one to better appreciate the subtle textures lurking beneath Verlaine and Lloyd's Stratocaster firepower. The Blow-Up preserves a longer and more enthusiastic performance from Television, while Live at the Old Waldorf finds them playing for a rather chilly away-from-home audience, but the band seems determined to show just what it can do, and these versions of "The Dream's Dream," "Little Johnny Jewel," and "Marquee Moon" are pure joy for guitar aficionados. Rhino Handmade are to be congratulated for finally giving this oft-bootlegged recording the authorized release it deserves, and providing still more evidence of Television's enduring brilliance and innovation -- 25 years after this set was played, Live at the Old Waldorf still sounds fresher and more exciting than most anything you're likely to see at a rock club on a given evening. ~ Mark Deming, All Music Guide

Live at the Old Waldorf的曲目列表

Live at the Old Waldorf的短评(29)