Prometheus - Musical Variations on a Myth 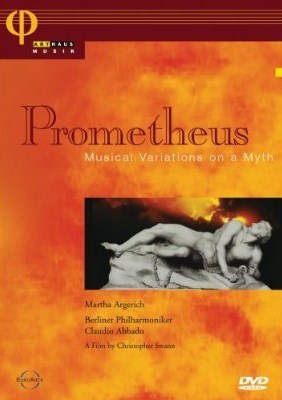 PROMETHEUS: MUSICAL VARIATIONS ON A MYTH • Claudio Abbado, cond; Martha Argerich (pn);1 Ingrid Ade-Jesemann (sop);2 Monika Bair-Invens (sop);2 Michael Hasel (b fl);2 Manfred Preis (contrabass cl);2 Mathias Schadock (spkr);2 Ulrike Krumbiegel (spkr);2 Berlin P; Berlin Singakademie;1 Solistenchor Freiburg2 • ARTHAUS 101717 (DVD: 57:00) Live: 5/23–25/1992
BEETHOVEN The Creatures of Prometheus: Excerpts. LISZT Prometheus. SCRIABIN Prométhéé.1 NONO Prometeo: Suite 1992: Hölderlin2
Arthaus Musik gives us little background information, but as far as I can tell, the story goes as follows: Back in 1992, Abbado and the Berlin Philharmonic gave a concert devoted to musical representations of the Prometheus myth, including music by Beethoven, Liszt, Scriabin, and Nono. Those performances were released on a much admired CD (Sony 53978), but they also served (with significant abridgments of the Beethoven and Nono) as the basic material for this film, apparently originally developed by Christopher Swann for television. In terms of visual style, the film is something of a hybrid. The Scriabin (which was performed with slightly tame lighting effects) is more or less a concert video; the Nono (for two singers, two speakers, bass flute, contrabass clarinet, small chorus, and electronics) is a concert video, too, but the visuals are electronically manipulated in a way that matches the avant-garde sounds coming from the stage. For the Beethoven and Liszt, Swann gives us a fluid composition in which various images—concert footage, nature shots, paintings, and more—are superimposed and interwoven, often in distorted form. Normally, I’m not taken with such efforts, which so often turn either irrelevant or cute. But while some of the imagery is cute and while some of it is hard to understand, Swann has a good ear for music, and you never get the sense that the video effects are going off in their own direction. Well worth watching, at least once.
As for the performances—they’re first-rate from start to finish. Pride of place goes to the lean, tightly wound reading of the Scriabin, which presents the work as a harbinger of high modernism rather than a last gasp of late Romanticism. Given Argerich’s presence on the piano bench, it’s no surprise that it sounds more like a piano concerto than usual—nor, for that matter, is it a surprise that there’s more forward impulse than usual. Not the most sensual performance you’ll hear—but surely among the most coherent.
But the Beethoven snippets, second-rate though they may be, are played with tremendous rhythmic gusto, too—and while Abbado can be accused of rushing the transition to the apotheosis, his Liszt is generally compelling as well, offering an almost ideal balance of romantic fervor and classical clarity of texture and rhythm (the fugue at rehearsal G is especially vivid). As for the Nono: although it’s not clear what the original concert order was, it comes last on the DVD. There aren’t many works that wouldn’t sound anticlimactic after the Scriabin; but the spare fragment offered here—a post-apocalyptic lament consisting of delicate flutters around largely sustained sounds—is surely one of them.
The sound, stereo only, is fine for in-concert recordings of its vintage. The presentation is a lot less satisfying: the notes are unreliable, even suggesting that the Liszt requires a chorus; the discussion of the Nono makes no mention of the excerpt included here. And while Nono may not have intended the words to be understood in performance, texts and translations would have been welcome nonetheless. Still, a minor blemish on a fascinating production. Strongly recommended, especially now that the CD is out of print.

Prometheus - Musical Variations on a Myth的曲目列表

Prometheus - Musical Variations on a Myth的短评(1)