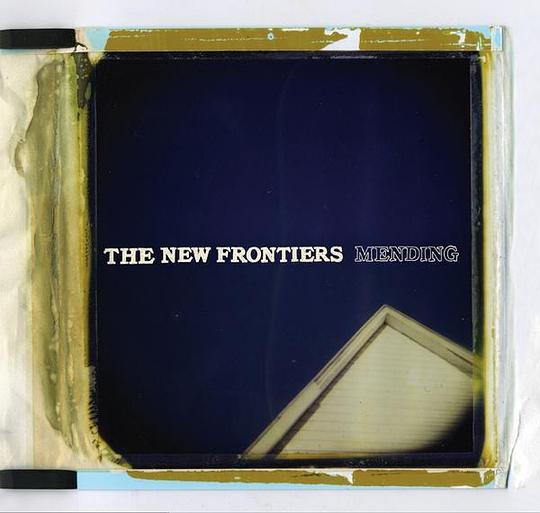 "In a time where big beats and big hooks equal big sales, and transience runs rampant throughout the medium, it is becoming ever so difficult to find records that still matter. You know, the ones that affect you. That stick with you. That serve as an underscore to the essential times in your life. While those types of records are certainly becoming an endangered species, there are thankfully those that defy this trend, and work to supply us with the instant classics we so rarely find anymore.
The New Frontiers are a band on the front lines of this battle with their debut full-length offering, Mending; they wisely let their music do the talking. Sonically, the band once known as Stellamaris offers up their take on a quieter, more introspective brand of indie rock. Anchored by singer Nathan Pettijohn’s emotive vocal delivery, and complemented in kind by an equally skilled Dallas-based supporting troupe, The New Frontiers present tunes with a quiet sense of majesty that still manage to pack a colossal emotional footprint. Their pacing is deliberate, but never sedate and their sound is at once both contemporary and traditional. The overall musical stew is one that combines dashes of alt-country, brit-rock, and indie-pop (among others) towards a final mélange sure to win over sets of ears for years to come.
From the opening swells of “Black Lungs,” Mending grabs a hold of its listener, but not at all in a forceful, brutish way. It is instead the type of prompting that begs for acquiescence, and the rest of the LP only cements that notion. Whether it is in the heartbreaking emotion of “The Day You Fell Apart” or the patient reflection of “Man Down,” The New Frontiers pack an abundance of poignancy into their entrance onto the world’s stage. It is all necessary, though, as exposure to the work’s later pieces requires preparation. For as listeners delve into the unassuming anthemics of “Mirrors,” the sparse acoustic/falsetto magnetism of “Passing On,” the sweeping grandeur of “This Is My Home,” and the ethereal moodiness of “Walking On Stones,” it is readily apparent that this is not your typical radio-rock fodder. This is not to say that the tracks on Mending wrestle with issues of accessibility, instead that they maintain a profound depth beneath their lustrous surface appeal.
After sharing the stage with some of the country’s hottest buzz bands, The New Frontiers now seem poised to break out on their own under the strength of their Matt Goldman-produced debut. Mending is a comprehensive journey through a range of sounds and emotions – one whose effect is not soon lost upon those it touches. Discussing the album, drummer Alex Bhore reveals that the band “wanted to make a record that was true to [themselves] and what the songs were in the first place.” Frontman Pettijohn further elaborates how, staying true to the record’s moniker, “a lot of the songs are about trying to fix certain things. Trying to fix yourself, trying to fix relationships with people, trying to make sense of things.” With Mending, The New Frontiers exhibit nothing less than a keen sense of music’s intrinsic healing power. Therapy has never felt better."