Never Forget: A Journey Of Revelations 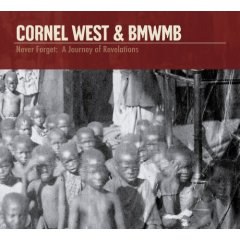 Dr. Cornel West, one of America's most prominent black intellectuals, has teamed up with Hidden Beach Recordings to produce one of the most important and socially-conscious music projects to be released in 2007. On the heels of the Don Imus controversy, topical debates on the political and sociological effects regarding the use of the N Word and our country searching for answers to the question "Now What?" all are addressed in the context of this CD. This compelling body of work features Cornel West as a conductor who orchestrates a symphony of hip-hop and r&b recording artists and producers in the delivery of a resounding message that offers music as a positive force to effect change, awareness and solidarity.

Never Forget: A Journey of Revelations is a riveting, thought-compelling approach to raise the consciousness of the mainstream music consumer through a positive lyrical approach. It exemplifies a level of love, unity, solidarity, and loyalty designed to the give the world a force of good in the form of music, especially Black music, in these bleak times.

Never Forget: A Journey Of Revelations的曲目列表