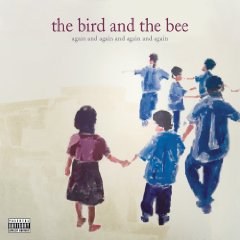 "Again and Again" is one of those songs that has gotten a lot of attention from a commercial using it -- in this case, a little Apple Mac-related movie.
It's also one of the poppier, sprightlier songs that electro-indiepop band the Bird and the Bee has turned out. And the "Again and Again and Again and Again" EP does it again -- it pairs this single with a couple other songs from their self-titled album, plus an additional remix of the eloquently named "F*cking Boyfriend." What a good sample.
"Again and again and again/Do it again, do it again," Inara George sings sweetly over a rippling keyboard melody. Then it busts out into a bouncy tambourine-and-guitar melody, with eerie synth winding through it like streamers. "It's a shame, it's a shame/It's a perfect shame/Creep under my door and we do it again, oh... You're so stupid and perfect/And stupid and perfect/I hate you, I want you..."
That's one of the poppier tunes of the EP, and things get more mellow and relaxed for "I'm A Broken Heart." It's all gentle jazzy rhythms, xylophones and trumpets, too peppy to be a ballad and too laid-back to be catchy. And for a song with this title, George sounds rather perky as she sings, "I'm a broken heart/My love is bleeding."
Then there's "F*cking Boyfriend" -- if you just listened to the light, twinkly melody, you'd never pick up on its distinctly un-sparkly theme ("To torture all the other girls/You keep me by your side?"). And finally there's a remix of that song by Peaches -- very dancy, sharp-edged and full of clubhouse synth, with George's voice sounding robotic.
The Bird and the Bee really specialize in upbeat little pop songs with less upbeat lyrics, and the three unremixed songs on this EP (which are also on their debut album) are good examples. Even the relatively upbeat "Again and Again" song is full of romantic confusion and conflicts, including the line, "Say my name, say my name/say my STU-PID NAME!" and wavers between adoration and frustration.
Which is pretty good for an album with such simple lyrics. The Bird and the Bee have only one real weakness -- they tend to repeat a single line many times ("I try, I try, I try...") per song, and often stick to vague, oblique expressions of feeling ("Wish, wish for the summer/Want, to pull over under/I wipe my tears away, away").
Fortunately that's the only real flaw with this EP -- George's sweet, soulful voice is lovely, even when she demands "Would you be my f*cking boyfriend?" or sings something grumpy. And she's backed by some truly lovely instrumentation -- lots of sprightly guitar, colourful synth pops and warbles, tambourines and cymbals, and a backdrop of warm, buttery trumpets in "I'm a Broken Heart."
Those with the Bird and the Bee's debut album will already own most of the "Again and Again and Again and Again" EP, but those seeking an introduction to their delightful, sweetly grumpy indiepop should check this out.