Nothing Is The End Of Everything 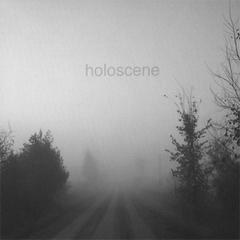 Rob Plastow - Guitar
Trevor Townsend - Drums
Dorian Williamson - Bass Guitar
Holoscene is an avant-garde instrumental band based in Toronto, Canada. Their sound combines orchestral-rock percussion, distorted bass guitar and open-tuned guitars to form pieces of sequentially structured wordless music. Themes in their music revolve around purposeful ambiguity, the natural world and the numinous.
Formed in 2006 the band developed their sound during the making of their first EP "Nothing Is The End Of Everything" (currently available in North America and scheduled for release in Europe in 2008). Straddling an area of music most commonly known as "post-rock" due to its instrumental nature, Holoscene are hard to pin down to any one specific genre and have had their sound described as cinematic, ambient, industrial, post-metal, and orchestral-rock. The British writer Warren Ellis has described their music as "transcendental etudes", whilst the band members themselves refuse to rule anything out.
In 2008 Holoscene’s noted performances will be at NXNE Festival on Saturday June 14th in Toronto, and in New York on Saturday August 9th with the Jack String Quartet at Le Poisson Rouge in Greenwich Village.
The band is currently working on a split 7" vinyl with friends Tunturia, with artwork created by Seldon Hunt, set for release in summer 2008. Holoscene is also writing material for their debut album.

Nothing Is The End Of Everything的曲目列表

Nothing Is The End Of Everything的短评(25)