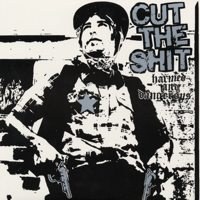 18 more tracks of pissed off, rocked out hardcore/punk from this band that has such a perfectly to the point name that you've gotta love it. Expect traditional hardcore with plenty of speed, yelling vocals, and no real surprises. "Cut the Bullshit" brings in a little more of a rock vibe, "Pushed Too Far" has a wild lead break that comes very unexpectedly, "No Control" is compact and memorable with some huge gang vocals and a nice breakdown that lets the bass come forth a bit (all too rare with this one), "Dead World" is another of the more rocked out tracks and is also among my favorite as it comes across as slightly catchier and more energetic, while "I Can't Cope" closes on a similar note and takes a slightly slower pace with some surprising melodic leads lines (another true winner). No song hits two minutes and many are less than one, so they don't fuck around at all, and this thing's over in a flash. The recording is decent but my only gripe, and it's kind of significant: Where's the god damn bass!? Everything sounds fine, a little rough, a little thin, but fine... there's just no god damn bass guitar in there at all! This kind of hardcore really needs that pounding bass presence, and it's definitely lacking here. It's not that big of a deal, but it does make a difference and is a slight letdown. The layout looks awesome and uses tons of high contrast graphics and dirty textures with some metallic silver ink. The lyrics are all crammed together and can get rough to read through, but it looks awesome so fuck it. Song titles like "Cut the Bullshit", "Pushed Too Far", and "No Integrity" should clue you in to the lyrical themes - most of which are just pissed off attacks on bullshit in day to day life, with a few pointing the finger at political matters or scene commentary. "Another year goes by and still my world is grey, so many chances I didn't take, I've watched my future fade away. As the years pass by, my ambitions die. I sit alone in my room, feeling beaten by my only hope..." Not bad. If you like angry and in your face hardcore that doesn't try too hard to be overly aggressive this is worth a shot for sure.