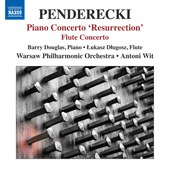 Scored for a large orchestra, including triple wind and a raft of percussion, Penderecki’s Piano Concerto, heard here in its 2007 revision first performed by Barry Douglas, renews the composer’s direct involvement with the ‘grand’ concerto tradition that culminated in Rachmaninov and Prokofiev. Its sub-title ‘Resurrection’ refers to the melody based on a chorale of a non-religious character, which gradually make its way into the foreground before emerging with striking power at the work’s climax. The more modest forces used in the Flute Concerto place no restriction on this work’s exceptional emotional range and kaleidoscopic colours.