Music of Another Present Era 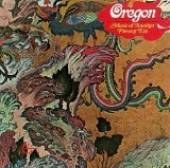 Collin Walcott - violin, guitar, sitar, tabla, mridangam, esraj, percussion
Glen Moore - flute, acoustic & electric bass
Paul McCandless - oboe, English horn
Ralph Towner - 6 & 12-string guitars, mellophone
Recorded at Vanguard's 23rd Street Studios, New York, New York in 1973.
MUSIC FROM ANOTHER PRESENT ERA is an important early work by one of the more consistently innovative and groundbreaking jazz fusion ensembles. A quartet comprised of multi-instrumentalists, Oregon fused a chamber-style classical approach with the improvisatory range of jazz and the melodies and rhythms of Indian and African music. As their compositions often tended toward quiet, acoustic, and meditative atmospheres, Oregon seemed to bridge New Age, classical, world music, and jazz all at once, long before the synthesis of such disparate genres was fashionable. This 1972 release remains one of the group's high-water marks.
Ralph Towner's guitar skills can be heard to fine effect on "Sail" (in dialogue with Glen Moore's bass and Collin Walcott's propulsive tablas). "Baku the Dream Eater" features an interesting play of brass, and "The Swan" is dreamy and alluring. Though the compositions on MUSIC FROM ANOTHER PRESENT ERA sound studied and precise, they are always marked by the freedom of improvisation (especially on the medley of "Shard/Spring Is Really Coming"), as well as complexity, sensitivity, and an expansive, all-inclusive approach that keeps the album sounding fresh decades later.Originally released in 1972, this album brings together classical, Asian, Middle Eastern, and post-bop jazz, and the results are astounding, thanks in great part to the openness to improvisation and the notable imaginations of the four artists.

Music of Another Present Era的曲目列表

Music of Another Present Era的短评(5)