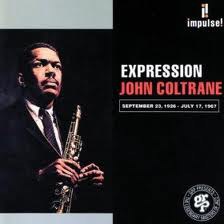 Expression is an album by jazz saxophonist John Coltrane. The title track was Coltrane's last studio recording[citation needed]; the rest of the album was recorded at about the same time as Interstellar Space. "To Be" features Coltrane on flute, the only recording he made on the instrument for an entire track.[citation needed] Expression was the last studio album to be approved for release by Coltrane before his death in July 1967, and was released in September 1967.