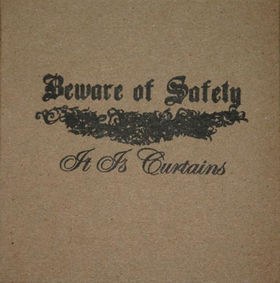 I like following bands from the very beginning of their career; from that debut twenty-copies-only 7 inch, to the handmade EP, all the way to the fifth studio album, there’s something quite rewarding about being there right from the start. However, as rewarding as that may be, what brings me more joy is just stumbling over a band you, and very few others, never knew existed, and this said band turning out to be great, ala Yndi Halda and Gifts of Enola. It’s akin to the feeling Jermaine Jenas must have every time he’s named in the England squad (obscure football references are the way forward). I’m sure you’ve guessed this already, but that’s what happened when I first heard the debut EP from Californian quartet Beware of Safety.
Opening track ‘Kaura’, possibly named after someone called Laura with fat fingers, could be plenty of other post-rock bands; light guitar work and tremolo picking chime away, before a melodic riff takes over. This could be Caspian, this could be The Timeout Drawer, and it’s definitely straight-up post-rock of the highest caliber. ‘Weak Wrists’ takes a heavier approach, with a dark and sinister feel protruding throughout, which is somewhat reminiscent of Upcdowncleftcrightcabc+start. ‘The Difference Between Wind and Rain’ and ‘Veneklasen’ show a much quieter and measured approach, with shimmering guitars and delay pedals used to full effect.
What really comes across from all the six tracks on It Is Curtains is the sheer emotions Beware of Safety manage to convey with just its instruments and effects pedals. While not up there in the realms of Do Make Say Think and Explosions In The Sky, Beware of Safety are certainly following the right lines to possibly matching myriad of feelings expressed by some of the big post-rock players. While that may be a premature statement on the basis of one EP, if Beware of Safety can produce more tracks like the closing ‘To The Roof! Let’s Jump and Fall’ then its place among the post-rock harmony will be assured. Quite simply, it’s a brilliant song. It uses the tried and tested, and much vaunted, ‘quiet/loud’ dynamic to great success. Starting slowly, it builds into heavy-yet-harmonious riff, before collapsing into a heart wrenching short breakdown, only for the riff to return, this time with added tremolo picking for greater emphasis as it crashes towards the finale. Mono could have written this track, it really is that good.
While Beware of Safety aren’t covering any new ground here, it would be far too harsh and flippant to dismiss them as generic, or merely copying its peers. Each track on It Is Curtains sounds fresh, and for a band using only guitars, bass, and drums, that’s quite an achievement in today’s post-rock environment. At the moment, the EP is one of those lovely hand pressed self –released affairs, but it really won’t be long before this band are signed, so, if you haven’t already, it’s about time you went and stumbled upon a future post-rock giant.
-James Ould