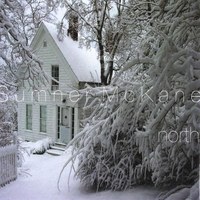 NORTH WAS ONE OF THE TOP FIVE ECHOES ESSENTIAL CDS FOR 2005
“Ever since Ry Cooder laid down his lonesome slide guitar on the laconic soundtrack to Wim Wenders's movie, PARIS, TEXAS, there has been a strain of ambient Americana music emerging throughout the country. It includes producer Daniel Lanois's cosmic cajun country, Lanterna's surf-spaghetti ambient-westerns and Bruce Kaphan's pedal steel guitar in space. Sumner McKane has been traversing the same terrain for several years now from his home in Portland, Maine and NORTH is easily his most accomplished work yet.
McKane is one of those guitarists who makes it seem simple, but his easy-going fingerstyle on electric and acoustic guitars is deceptive. He's an orchestrator of guitar, creating lush filigree and sometimes searing leads.
For NORTH, he's assembled a small, sympathetic ensemble of drums, bass and occasionally violin. "Careful it Doesn't Look Safe Yet" is typical, with double acoustic guitars laying down rivulets of sound while McKane's electric fades in and out in phantom sustains. McKane's "day job" is playing in a Country & Western band and you can hear that influence here in the plaintive fingerstyle picking and pedal-steel-like sustains and bends he brings to his electric guitar.
Track after track on NORTH, McKane paints a uniquely American landscape, a travelogue for a cross-country trip from pristine New England winters to the wide-open expanses of the plains.”

1 Dogsled
2 Bugs in Her Pockets & Hunting For Salamanders
3 Careful, It Doesn't Look Safe Yet
4 Old House, Friendly Ghost (hopefully)
5 The Woods cross the Street When I Was Little
6 Girl On a Beach in Black & White
7 Far-off Exotic Places, Like Winnipeg
8 lberta
9 We Don't Live By a Lake Yet
10 The Drive to Whitefish:midnight, With Concrete Blonde t a Perfe
11 The Fair
12 Kissed By a Witch in the Woods 展开