John Tavener: Tears of the Angels 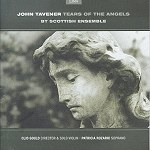 JOHN TAVENER
Throughout his career, Sir John Tavener has been a unique and influential figure on the contemporary music scene. From his days as an audacious young composer at the forefront of the avant-garde movement in the late sixties and seventies, through to his present-day rejection of many of the standard aesthetic principles on which the western classical music tradition is based, he seems to have caused controversy whichever direction he has moved in.
John Kenneth Tavener was born in London in 1945, and educated at the Royal Academy of Music with Lennox Berkeley as his tutor in composition. He was still at college when he won the prestigious Prince Rainier of Monaco Prize in 1965 with his cantata, Cain and Abel. He has been closely linked with religious music, and his catalogue of works includes three Requiems. More recently has moved towards sacred orchestral works, of which his score for cello and orchestra, The Protecting Veil, has entered the world of 20th century 'pop' classics.
He has been influenced by Stravinsky, but has developed a very personal style, that embraces his own concept of melodic minimalism. Within the field of sacred music Tavener has developed a style whereby he uses what appears to be a traditional theme, which on closer examination is seen to have been his own. He has been criticised for his lack of a distinct purpose in the progress of his career, while envied by those who see him as one of the most commercially successful composers of his time. That success was greatly furthered when his sacred work, Song for Athene, was sung at the funeral ceremony of Princes Diana.
On the surface, he can seem like a figure of contradiction: on one hand, he moves in the austere world of royalty and religious institutions; on the other, he can be seen communing in a glamorous world of film and pop stars. His critics have jumped on these apparent paradoxes to denounce Tavener as a carefully and cleverly manufactured PR product, but this is a superficial judgement. All his paths are taken with the utmost integrity and conviction, and unified by one consistent, obsessive goal: a desire to find what is true in the deepest sense of the word. Different people and different traditions refer to this truth by different names, but whether you call it salvation, the soul, nirvana, cosmic consciousness or simply the ‘essence’ of life,Tavener’s one and only aim is to bring himself, and his audiences, closer to an ultimate truth through his music.
Tavener has moved from an "Orthodox" towards a Universalist view in which all religions are seen as equally valid.Throughout his career there have been many influences, not only from different religious traditions but from secular sources as well. The unifying factor between them all is not any one particular tradition, it is the desire to express truth and beauty through his music.

John Tavener: Tears of the Angels的曲目列表

John Tavener: Tears of the Angels的短评(6)