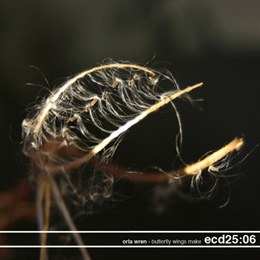 The debut album under the name Orla Wren by multi-media artist Tui, who lives in the north of England and travels around there and Scotland in his van, selling his photographs and making music. His photos are of nature in microcosm, macro shots of plants and organic life. When he is not taking or selling his pictures he holes up in his cottage in the Highlands and makes music, the process he uses reflecting those which he uses for his pictures.
Traditional instruments, and found organic and acoustic sounds are manipulated into beautiful melodic abstractions on Butterfly Wings Make, which also clearly reflects his environment; the essence of a summer day spent lying in a field surrounded only by the the sound of insects and a gentle breeze, but also that of sheltering from rain under canvas or being caught in a thunderstorm. A soundtrack that touches both head and heart, this is a genuinely heartfelt album that has been put together with a great deal of love and attention, revealing a work of manifold pleasures and hidden secrets. Another languid dose of pastoral loveliness from the ever-reliable Expanding camp.