Alive At The Assembly Line 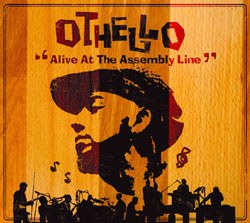 Alive at the Assembly line is what I consider my debut record because it showcases where I am upon the release of it, and utilizes the resources God has granted me to create a project I believe to communicate my heart honestly and effectively. The record is all about development. Using the good and bad to benifit your growth...The assembly line represents life. from one perspective your the object on the conveyer belt and the other perspective is your the worker on the assembly line. From the idea of the object being added on to as it travels down the belt its like us constantly being contributed to by people, circumstances, and how we deal with them. As a worker on the assembly line it represents us contributing (giving to) life and others. The contrast is that in reality the assembly line workers just do what they do over and over again in repetition and not a lot of thought, and the object on the belt isn't alert at all because its not alive. So I'm proposing being alive in process of it all. Whether contributing or being contributed to. That is the tone of the record.
as far as collabs go: Vursatyl from LifeSavas, Propaganda of Tunnel Rats, my man Surreal, of course Braille and Ohmega, Pigeon John, D-Minor of Wax Reform, and Portland's own Olivia Warfield lacing soulful vocals on a couple joints. Now on production I got Illmind (Wax reform), Stro (the Procussions), Mr. Jay (the Procussions), D-Minor (Wax Reform), M-Phazes (Wax Reform), Siamese Sisters, and the new band I'm working with called The Black Notes. I had Stro compose a couple of the live tunes as well and my man Ohmega Watts got down and created a skeleton for another jam as well. I'm happy with all the material and feel its the most accurate project to date. PS... my man Matterphact did a track too.
http://www.hmv.co.jp/product/detail.asp?sku=1264211
http://www.miclife.com/jpn/mlr1015.htm

Alive At The Assembly Line的曲目列表

Alive At The Assembly Line的短评(3)