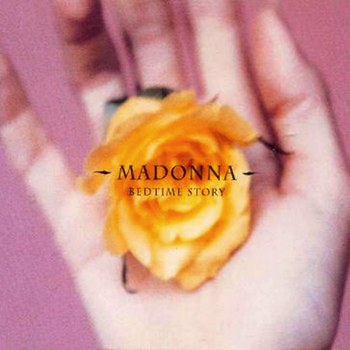 "Bedtime Story" is a song by American singer Madonna from her 1994 album Bedtime Stories. The song was released as a single in April 1995. "Bedtime Story" was the third single off the album.
"Bedtime Story" was written by Icelandic singer Björk and co-produced by Nellee Hooper. The lyrics to "Bedtime Story" are Björk's own criticism of Madonna's aesthetic. Though Björk wrote the song for Madonna, the final version featured signicantly different lyrics, changing Björk's original meaning. Björk would go on to use some of her unused lyrics for the B-side "Sweet Intuition", which was released later in 1995.[citation needed]
Issued as the third single from the Bedtime Stories album, the song received full remix treatment. Alongside the single edit of the song, a number of dance remixes were commissioned, including two by Junior Vasquez The song was a top five success in markets such as the UK and Australia, as well as being a U.S. #1 dance club hit, but on the U.S. Billboard Hot 100 the song peaked at number forty-two, becoming the first Madonna single since 1983's "Burning Up" not to reach the top-forty. Her previous low was "Bad Girl", which peaked at #36 in 1993.
The single was performed live at the 1995 BRIT Awards in London. It was Madonna's first performance at the Brit Awards. It coincided with the newly remixed single release in the UK which peaked at number-four. Though the song was not included in her Drowned World Tour, however, Madonna re-worked the Orbital remix for her Re-Invention Tour, using it as an interlude, with a new video directed by Dago Gonzalez. In this video Madonna appears with long, straight blonde hair, with white stallions running through deserts intertwined with footage of the singer.
A distorted vocal sample from Bedtime Story was added by Nellee Hooper for the remix of 1996 Garbage single, #1 Crush, at the beginning of the song.