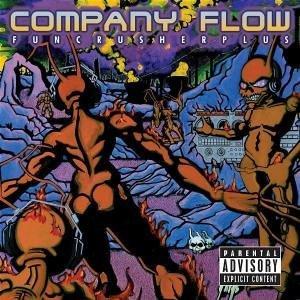 Company Flow专辑介绍：
by Steve Huey
Featuring material recorded over 1994-1997, Company Flow's official full-length debut, Funcrusher Plus, had a galvanizing effect on the underground hip-hop scene. It was one of the artiest, most abstract hip-hop albums ever recorded, paving the way for a new brand of avant-garde experimentalism that blatantly defied commercial considerations. Musically and lyrically, Funcrusher Plus is abrasive and confrontational, informed by left-wing politics and the punked-out battle cry "independent as f*ck." It's intentionally not funky and certainly not danceable; the beats are tense and jagged, and often spaced far apart to leave room for the MCs' complex rhymes.
Bigg Jus
and
El-P
's lyrical technique is so good it's sometimes nearly impenetrable, assaulting the listener with dense barrages of words that take a few listens to decipher. Even if this is all highly off-kilter, it's also a conscious return to hip-hop on its most basic, beats-and-rhymes level; hooks or jazz and funk samples aren't even considerations here. The production is spacy and atmospheric, often employing weird ambient noises and futuristic synths that clash with the defiantly low-budget production values. It's also quite minimalist, particularly on tracks like "Vital Nerve," which is basically just a three-note synth line over a beat, and the classic
Indelible MC
's single "The Fire in Which You Burn," where
Co-Flow
trades rhymes with
the Juggaknots
over a skittering beat and sitar drone. Other tracks have sci-fi and conspiracy theory undertones; some are set in an Orwellian dystopia, while some pointedly satirize corporate and capitalist greed. Yet there's also some straightforward realism, as on "Last Good Sleep," a frightening domestic abuse drama. Funcrusher Plus demands intense concentration, but also rewards it, and its advancement of hip-hop as an art form is still being felt. It's difficult, challenging music, to be sure, and it's equally far ahead of its time.