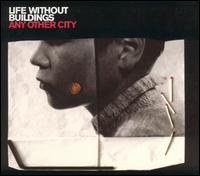 The numerous comparisons drawn by Life Without Buildings are across-the-board positive. Through the music and sleeve design, they come across as refugees from Rough Trade's class of 1979. Liliput, the Fall, Delta 5, and even the Slits occasionally come to mind. These female-fronted groups have certainly inspired LWB, but this quartet — simply a drummer, a bassist, a guitarist, and a vocalist — offers much more than nostalgia and post-punk plundering. They're more of a pop band, which is just fine. The jagged, economical rhythms of late-'70s and early-'80s post-punk are prominent. Robert Johnston's guitar playing is melodic and pleasant, differing from the cut-and-scrape methods of his forebears: think of Talking Heads' or Throwing Muses' first albums. Unlike many post-punk rhythm sections, the bass of Chris Evans and the drums of Will Bradley aren't reggae-influenced. They provide a plaintive, professional surface for firecracker Sue Tompkins to glide atop, throwing in the occasional, non-jutting shift in tempo that also avoids predictability. Tompkins' scat-speak singing is the band's main attraction, a youthful chirp that never pierces. Her repet-pet-petitive repetitive style might be at odds with the ears of some listeners, but it's just as unique as the exuberant vocals featured on records by any of the bands mentioned above. The set is remarkably cohesive, with the differences in each song taking a few listens to sink in. Only six of Any Other City's ten songs will be new to those who purchased the band's trio of 2000-issued singles. The overlap is reworked, usually with slight improvements made over the original. Only "The Leanover" suffers, losing some of the raw thrill of the single version. If there's a gripe to be had with the record, that's it. An ex-excite-exciting, phenom-enom-phenomenal debut.