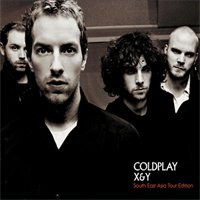 2006 CD/DVD (NTSC/Region 0) Fantastic Asian pressing of their third album released to commemorate their 2006 tour of the Far East. The bonus DVD features all of their B-sides (DVD-Audio) lifted from the album thus far, 'Things I Don't Understand', 'Proof', 'Poor Me' (Live at the Hollywood Bowl), 'The World Turned', 'Sleeping Sun' and 'Gravity' along with all of their music videos to all the singles, 'Speed of Sound', 'Fix You', 'Talk' and the final single lifted from the album, 'The Hardest Part'. Packaged in an exclusive slipcase. EMI. 2006.