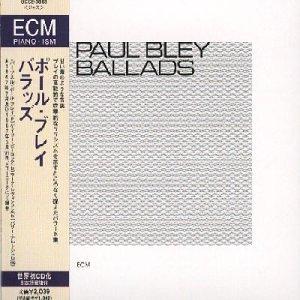 Paul Bley
From Wikipedia, the free encyclopedia
Paul Bley, CM, (born November 10, 1932) is a Canadian free jazz pianist.
He was born in Montreal, Canada, and has been a long-time resident of the United States. His music characteristically features strong senses both of melodic voicing and space.
As well as being a distinctive and innovative musician himself, he has worked with a number of important musicians at key points.
In the 1950s he founded the Jazz Workshop in Montreal, performing and recording there with Charlie Parker. He also performed with Lester Young and Ben Webster at this time.
In 1953 he conducted for Charles Mingus on the "Charles Mingus and his Orchestra" album and the same year Mingus produced the "Introducing Paul Bley" album with Mingus and Art Blakey. In 1960 Bley recorded on piano with the Charles Mingus Group.
In 1958, he hired Don Cherry, Ornette Coleman, Charlie Haden and Billy Higgins to play at the Hillcrest Club in California.
In the early 1960s he was part of the Jimmy Giuffre 3, a clarinet, piano and bass trio with bassist Steve Swallow. The quiet understatement of this music makes it possible to overlook its degree of innovation. As well as a repertoire introducing compositions by his ex-wife Carla Bley, the group's music moved towards free improvisation based on close empathy.
During the same period Bley was touring and recording with Sonny Rollins, which culminated with the RCA Victor album, "Sonny Meets Hawk" with Coleman Hawkins.
In 1964 Bley was instrumental in the formation of the Jazz Composers Guild - a co-operative organisation which brought together many of the most radical musicians in New York.
Bley had long been interested in expanding the palette of his music using unconventional sounds (such as playing directly on the piano-strings). It was therefore consistent that he took an interest in new electronic possibilities appearing in the late 1960s. He pioneered the use of Moog synthesizers, performing with them before a live audience for the first time at Philharmonic Hall in New York City.
This led into a period of the Bley-Peacock Synthesizer Show, a group where he worked with songwriter Annette Peacock.
Subsequently Bley returned to a predominant focus on the piano itself.
During the 1970s, Bley, in partnership with videographer Carol Goss, was responsible for an important multi-media initiative, Improvising Artists Inc which issued important LPs and videos documenting the solo piano recordings by Sun Ra and other works of free jazz with Jimmy Giuffre, Lee Konitz, Gary Peacock, Lester Bowie, John Gilmore, Pat Metheny, Steve Lacy and others.
Bley and Goss are credited in a Billboard Magazine cover story with the first "music video" as a result of the recorded and live performance collaborations they produced with jazz musicians and video artists.
Bley was featured in the 1981 documentary film Imagine the Sound, in which he performs and discusses the history of his music.
Bley has continued to tour internationally and record prodigiously, with well over a hundred CDs released. In 1999 his autobiography, "Stopping Time: Paul Bley and the Transformation of Jazz" was published. In 2003 "Time Will Tell: Conversations with Paul Bley" was published. And in 2004 "Paul Bley: la logica del caso" (Paul Bley: the logic of chance) was published in Italian. In 2008, he was made a Member of the Order of Canada.[1]