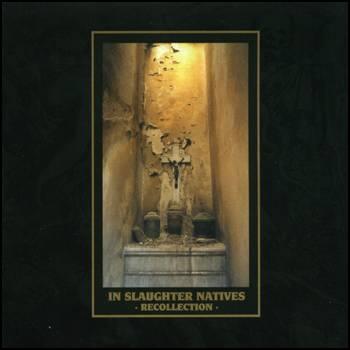 Apocalyptic orchestral looped entwine with frightening Industrial music. "Recollection" presents a taster for the upcoming In Slaughter Natives box, with a selection of two songs from each release remastered by Peter Pettersson of Arcana and

One of the very first outbursts on CMI were In Slaughter Natives, and still to this day they are one of the most wellknown and respected acts on the label. Since the birth of J. Havukainen's brain-child in 1988, the accumulated brilliance and excitement over each release have far surpassed what any other band or man can accomplish during a lifetime. The bombastic classical agony and infernal pleasures have been immensely influential, and many are the artist in this genre that owes a great deal to In Slaughter Natives. This is music gone cataclysmic, the soundtrack of the apocalypse, the mad laughter of the heretic burned at the stake. This is simply a premonition of the music we will all have to endure when our pitiful bodies are cleansed by the flames of Purgatory.

This 3000 copies limited edition includes tracks from the 4 ISN albums, remastered by Peter Pettersson (Arcana/Sophia). "Recollection" also serves as a taster for the 5-CD retrospective box that Cold Meat Industry will issue by the end of 2001, which will include the 4 ISN albuns and a CD with live material.