The River In Reverse [CD/DVD Combo] 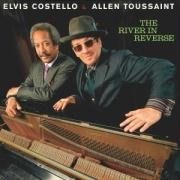 </p>Toussaint led the ensemble from the piano, with Imposters keyboard player Steve Nieve switching to Hammond B3. The majority of the tracks were cut with the entire group in the room and Costello singing live, occasionally adding his guitar to the mix. Costello selected songs from deep within the Toussaint catalogue such as "Nearer To You," "Freedom for the Stallion," and "Tears, Tears and More Tears." Toussaint kicks off the lead vocal on his composition, "Who's Gonna Help Brother Get Further?" and trades vocal lines with Costello and bassist Davey Faragher on several other tracks.

</p>All of the horn arrangements are marked with Toussaint's distinctive style and, commented Costello, "add a second voice" to the title track, the one song that Costello wrote alone. Just before the recording began, the duo holed up in New York to write together throughout October, a quick-moving process that resulted in four songs on the album of various combinations of words and music.

</p>Toussaint previously produced a 1983 Costello cover of Yoko Ono's "Walking on Thin Ice" with the Attractions and the T.K.O. Horns, and also contributed piano to the New Orleans-recorded "Deep Dark Truthful Mirror" from Costello's 1989 album Spike.

</p>Immediately following Hurricane Katrina, Toussaint relocated to New York City, where the two renewed their musical friendship at several benefit concerts and club gigs during a seven-day period from the 17th of September, leading to discussions of this new album. The powerful song "The River in Reverse" was written by Costello on September 24th, 2005, and performed by him for the first time at that night's "Parting the Waters" benefit event organized by the The New Yorker magazine.

The River In Reverse [CD/DVD Combo]的曲目列表

On Your Way Down

The River In Reverse [CD/DVD Combo]的短评(4)