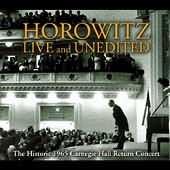 Vladimir Horowitz's May 9, 1965 Carnegie Hall return marked the legendary virtuoso's first recital following a 12-year absence from playing in public. Columbia Masterworks recorded the concert, and the resulting album became an instant classic. The present reissue differs from past incarnations in that for the first time we hear the concert remixed from original three-track tapes, with no editing whatsoever. Previous releases include post-production edits and inserts not generally acknowledged at the time. Horowitz, for instance, remade the coda to the central movement of Schumann's C major Fantasy. According to Horowitz, heat from the stage lights caused perspiration to fall into his eyes at a moment when he needed to see the keyboard, resulting in a momentary stumble. Other finger slips and wrong notes were left intact, although astute listeners might have noticed occasional ambient changes masking nips and tucks (notably at 5:57 in the Bach-Busoni Toccata, where Horowitz originally struck a particularly exposed wrong chord). The bottom line is that Horowitz's corrections were cosmetic, not interpretive in nature, and thus easily justifiable. By the same token, the unedited "Historic Return" does not tarnish Horowitz's reputation one iota. And the aforementioned Schumann boo-boo, by the way, ranks hardly a blip on the disaster radar. For repeated listening, however, I agree with Horowitz's decision. In any event, it's the music that counts, and every Horowitz fan should know these recordings, edited or not.

Some listeners may find Horowitz's conception of the Schumann Fantasy more sectionalized and detail-oriented than the flowing, symphonic game plan of, say, Pollini, Arrau, Fiorentino, or Perahia. Others might be bothered by the Bach/Busoni's first-movement tempo gearshifts (I'm reminded of my colleague Harris Goldsmith's priceless epithet: "Bach-maninov!"), although the central Adagio's hushed aura and melting legato makes time stand still.

No stylistic issues bear upon Horowitz's utterly internalized and soul-bearing Scriabin, and if Chopin's G minor Ballade leaves an unsettled taste, the Mazurka and Etude sing and soar. The Debussy is more relaxed and limpid than the pianist's earlier recordings of this favorite encore, and if the Moskowski A-flat Etude's ticklish scales don't make you smile, than what will? Horowitz closes with his signature Schumann Träumerei. Its 1962 studio counterpart is included within the complete Kinderszenen that fills out Disc 2. Given that Sony also re-released this performance to celebrate the pianist's centenary, its inclusion here makes little A&R sense. Couldn't the label instead have unearthed some interesting, unreleased material from rehearsal tapes made prior to the concert?

A bonus DVD offers three priceless outtakes from the 1985 film The Last Romantic. How Horowitz could negotiate Chopin's "Black Key" Etude so effortlessly with flat, extended fingers is one of piano playing's unsolved mysteries. Notice also how his fast, blurry fingers and relaxed hands zip through the Moskowski F major Etude. He paints Liszt's "Au Bord d'une Source" in broader brush strokes, warmer tones, and more flexible lines than in his late-1940s RCA recording. This is a fascinating reissue designed to tempt Horowitz connoisseurs.

2. Phantasie for Piano in C major, Op. 17 by Robert Schumann

8. Children's Corner: no 3, Serenade for the Doll by Claude Debussy