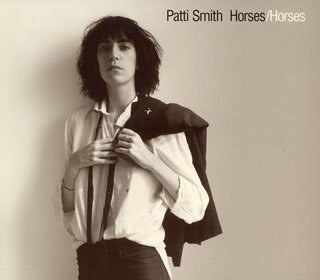 November 2005 marks the 30th anniversary of the release of Patti Smith's debut album, Horses, a groundbreaking rock & roll masterpiece which continues its unparalleled influence on rock music, style and culture. Arista/Columbia/Legacy Recordings will celebrate this musical milestone with the release of Horses/Horses, a two-disc Legacy Special Edition of Patti Smith's debut album, on Tuesday, November 8.

Disc One of Horses/Horses features the original album, in its entirety, along with the bonus track, Patti's interpretation of the Who's classic "My Generation." Initially released as the B-side to "Gloria," the first single from Horses, in 1975, "My Generation" features John Cale, the album's producer, on bass. The Legacy Special Edition of Horses has been remastered by Greg Calbi producing superior sound to previous editions of the album.

The second disc of Horses/Horses showcases Patti Smith and her Band--Lenny Kaye (guitar), Jay Dee Daugherty (drums), Tony Shanahan (bass), Tom Verlaine (guitar) and featuring Flea from the Red Hot Chili Peppers--performing the complete Horses album live, with a "My Generation" encore, at the Royal Festival Hall in London on June 25, 2005. This historic performance of Horses was the culminating concert at the 2005 Meltdown Festival, which was curated by Patti Smith. (Lenny Kaye and Jay Dee Daugherty were both members of the ensemble that played on the original Horses while Tom Verlaine was a guest artist on the 1975 album).