Where Your Road Leads 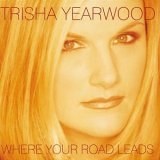 Where Your Road Leads is the seventh studio album by country music singer Trisha Yearwood, released in 1998 by MCA Nashville.
The album reached #3 on the Billboard country albums chart. The singles "There Goes My Baby", "Where Your Road Leads", "Powerful Thing" and "I'll Still Love You More" were all released from this album, peaking at #2, #18, #6 and #10, respectively, on the Billboard country music charts between 1998 and 1999. The title track was co-written by Victoria Shaw, who originally recorded it on her 1995 album In Full View. Buddy Miller provides harmony vocals on the track "Bring Me All Your Lovin'." "I'll Still Love You More" was written by Diane Warren, who also wrote Yearwood's hit from the previous year, "How Do I Live."

There Goes My Baby