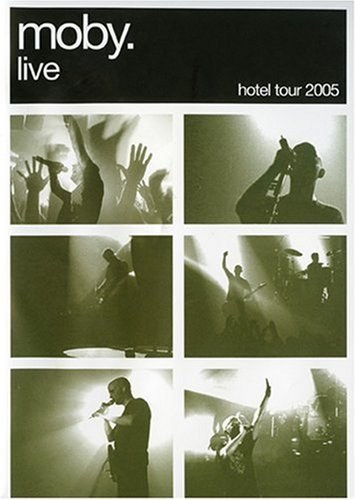 Recorded during the Hotel tour in 2005, the DVD features classic Moby tracks such as Why Does My Heart Feel So Bad?, We Are All Made Of Stars, Natural Blues, Go, Porcelain and Lift Me Up as well as a cover of Lou Reed's Walk On The Wild Side. Included on the DVD are the videos for Lift Me Up, Beautiful, Raining Again, Spiders and Dream About Me plus TWO bonus films, unavailable elsewhere. Little Movie #1 is a jaunt around the world, filmed by Moby with 'Dream About Me' as the soundtrack, and shows a glimpse of life on the road while Mr Fish is a humorous puppet film starring Mr. Fish. The DVD comes backed with an exclusive remix CD featuring tracks from the latest album Hotel remixed by, amongst others, Mylo, Tiga, Steve Angello, Booka Shade and Axwell. The live DVD, recorded at Brabathalle, Leuven in May 2005 and directed by George Scott features Moby performing with his band, Laura Dawn (Vocals), Scott Frassetto (Drums), Daron Murphy (Bass/Guitar/Backing Vocals) and Luci Butler (Keyboards/Backing Vocals)