In Sadness, Silence and Solitude 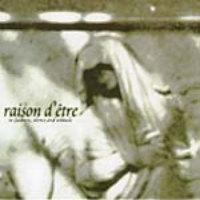 The fourth album by Swedish darkwave act Raison d'Être opens with sounds of bubbling water, followed by a frightening cavernous rumble that trails off into calming Gregorian chant. It's a series of events that proves emblematic of the disc as a whole: a marriage of sounds both ugly and beautiful, as if to prove that the concepts exist only in relation to each other. Sweeping, epic keyboard washes, tranquil medieval voices, but always the distant rumbling, the unsettling dark ambiance, the sense that all is not well in this cold, dimly lit dungeon Raison d'Être have constructed. It's a fine return to form for the band, whose debut, 1993's Prospectus I, saw them embark on this strange journey but whose previous album, Within the Depths of Silence and Phormations, leaned a bit too far into the realm of industrial noise for many fans.

In Sadness, Silence and Solitude的曲目列表

In Sadness, Silence and Solitude的短评(12)